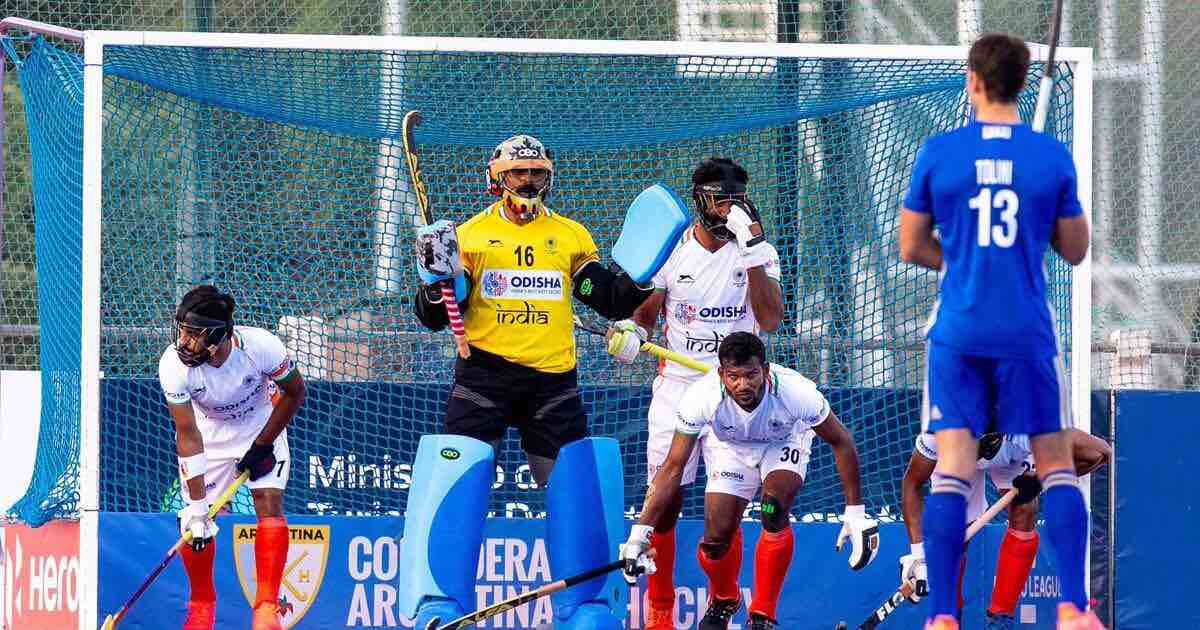 The Indian Hockey team is off to a solid start by beating the reigning Olympic Champion team Argentina in a comprehensive 3-0 win in FIH Pro League at the CeNARD Sports Complex in Buenos Aires on Sunday.

The match which was played post midnight according to Indian Standard Time (IST), saw goals from Harmanpreet Singh (11th minute), Lalit Upadhyay (25th minute) and Mandeep Singh (58th minute) which helped India in registering a win as they move up to the fourth spot on the points table with 15 points from their eight games.

The team played with far more control and composure, with goalkeeper Krishan Pathak who was also playing his 50th match for India, making a couple of crucial saves after seeing off Argentine pressure in the opening 10 minutes.

What added the cherry on top was a corner earned by Indian skipper Manpreet Singh with only 25 seconds left on the clock. Vice Captain Harmanpreet converted the corner with an electrifying drag-flick just six seconds from the hooter to fetch the 2-2 equaliser, pushing the match into a penalty shootout. The penalties were scored by Lalit Upadhyay, Rupinder Pal Singh and Dilpreet Singh while India’s experienced custodian PR Sreejesh came up with impressive saves to fetch India a bonus point.

Talking about the team, Coach Graham Reid said, “What I really liked from Saturday’s game was the ability to not give up, and stage a comeback. It is a good confidence booster to know that if you are stuck in that position, you have the patience and skill to be able to do that.”

The nail biting match saw India get a 1-0 lead, courtesy of Harmanpreet’s corner. But Argentina hit back with their circle penetrations, putting the Indian defence under pressure. They also got a penalty corner from India which was taken by Martin Ferreiro, who impeccably executed an equaliser. He also scored the second goal for his team, through another penalty corner, ending the second quarter with a comfortable 2-1 lead.

The third quarter was goalless with both teams keeping the pressure up against each other. Both teams secured a penalty corner but failed to deliver on it. The last quarter saw all the action. As pressure mounted on India Manpreet Singh’s effort in the final moments ensured a successful result.

“I think the biggest takeaway from this match is our fighting spirit. We didn’t lose hope until the last minute and we fought back really hard to earn this result,” vice captain Harmanpreet was quoted saying.

Following this, India is set to face Argentina for two more practice matches on Tuesday and Wednesday.